If you’re a patient of ours, you have heard me speak passionately about the importance of making several dietary changes that will be discussed in this chapter.

Convincing patients to modify their diets and abandon unhealthy, disease-causing habits is one of the most challenging aspects of being a physician. Many patients are simply reluctant to admit or fail to understand that making poor dietary choices can put them in a club that no one wants to belong-one of the millions of Americans who suffer from life-threatening disease. Because of false ideas or what I call “stinking thinking,” the majority of Americans will end up a disease statistic, unless they are willing to change their diets.

Despite spending 1.6 trillion on health care in 2003 in the U.S., we are one of the sickest countries in the world. We rank last among industrialized nations in all-around health; we have more degenerative diseases than any other country in the world; 1 out of every 2 people will die of heart attacks and strokes; 1 out of 3 will die from cancer; 1 out of 8 women will get breast cancer. What many in this country fail to realize is that these frightening and alarming statistics are unique to the U.S. In fact, we have diseases in this country that others don’t have names for, including osteoporosis (which doesn’t even exist in Okinawa.) Autoimmune diseases, Heart Disease and Cancer, are extremely rare. Without traveling to other nations or studying their respective health statistics, many people simply believe that it’s normal to succumb to these afflictions. It may be common but it is far from normal. In fact people in Okinawa, Royal China, Indonesia, to name a few, not only live longer than Americans, but they live their lives free of degenerative disease. They simply die of old age, something quite rare in the U.S. today.

In this country, we assume that most of us will probably die from disease. This is an example of “stinking thinking.” I recall an Okinawan man who was featured on the cover of Newsweek magazine a while back. The fact that he was 102 caught my attention but that wasn’t the most impressive aspect of the story. Amazingly, this centenarian still plowed his fields every day. What was most noteworthy in the story was the fact that he was not the exception, but the rule among fellow Okinawans.

But younger generations are starting to suffer from degenerative disease. Why? Their diets no longer reflect the diets eaten by generations of Okinawans before them. If you believe that genetics are at work, think again. When older Okinawans imigrate to other countries, they suffer from disease at the same rates as others in their adoptive lands. For example, if they relocate to the U.S., their risk of heart attack and stroke rises to 1 out of 2, despite the fact that these ailments are rare in their native land.

In this country, we simply accept what we believe to be our ultimate fate. We think, “well, my father had heart disease so I will too, if I inherited that bad gene.” This is simply not the case and just another example of “stinking thinking.”

While most of us realize that we have a genetic weakness for some disease, few understand that we actually have to do something to cause the disease to manifest itself in our bodies. Take the Pena Indians of Southern Russia for example.

Before WWII, this tribe had zero incidence of Type II Diabetes. After being introduced to a western diet that included processed food, today over 50 % of the Pena Indians suffer from Type II Diabetes. Obviously, they have a genetic weakness for this disease. However, when they ate a diet that was natural and well-suited to them, they did not develop the disease, despite their genetic Diabetes predisposition.

Unfortunately, my father typifies people who believe that they are unable to control their health destiny. My father insisted on eating things that he liked despite knowing that they were bad for his health. “I have to die of something so I might as well enjoy myself,” he was fond of saying.

The problem with this “stinken thinken” is that we don’t simply succumb to a disease and die at age 70 or 80. Unfortunately for many, there are years of suffering between the onset of a disease and death. Not only does disease cause suffering but it robs many of the ability to enjoy the things they love and the ability to do everything God willed us to be. Illness prevents people from glorifying God in ways that He would want. It is very difficult to fulfill our purpose while enduring pain and suffering. I can attest to this from my personal experiences. God can still work it all out for the good, but that doesn’t mean that it was His perfect will for our lives.

Years later, my father realized that I was right about his poor diet and the detrimental toll it has taken on my family. Eight years ago, my mother suffered from a debilitating stroke, while my father must endure the affects of emphysema. “It would have been easier if your mother and I had just died, but look at us now,” he admitted recently.

My mother is now confined to a wheelchair and only speaks if spoken to and is dependent on my father for every aspect of her daily care, from food to hygiene. Due to respiratory ailment, my father is unable to swing his beloved golf clubs. Not quite the golden years, is it?

But through God, some good came from this; watching my parents suffer has put me on this mission to spread the gospel of the importance of a good diet to preserve health. No one taught my parents that health and healing comes from within and that God blessed them with bodies that are capable of overcoming disease. They simply went on taking their medications assuming they were OK until their health degenerated to the place where they are today. They focused only on their symptoms, but never the root cause of their ailments.

My hope and prayer for you is that you are willing to make these important dietary changes to avoid becoming another health statistic like my parents.

My favorite saying is “God and our bodies do not need help healing, they just don’t need interference.” All three of these dietary changes remove interferences with the way God designed our bodies to work and function. As doctors, we need to let the body do its work to heal, not simply mask symptoms with often-times harmful, costly and ineffective medications. 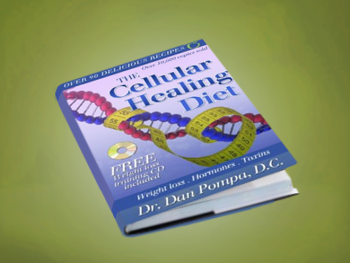